On July 21 2012, the National Foundation for Science and Technology Development  (NAFOSTED) held a conference in Hanoi to deploy the selection of basic research projects in Natural Science in 2012. The conference was attended by the Board of Trustee, Executive Officers and more than 70 scientists who are members of the 2012 – 2015 Scientific Committees in Natural Science. Mr. Le Dinh Tien, Vice-Minister of  Science and Technology cum Chairman of the Board of Trustees, attended and directed the conference.
At the Plenary Session in the morning, the NAFOSTED presented 08 Scientific Committees of the 2012-2015 mandate in 7 fields: Mathematics, Information Technology and Computer Science, Physics, Chemistry, Earth Science, Life Science (divided into Biomedecine-Pharmaceutics and Biology-Agriculture) and Mechanics. 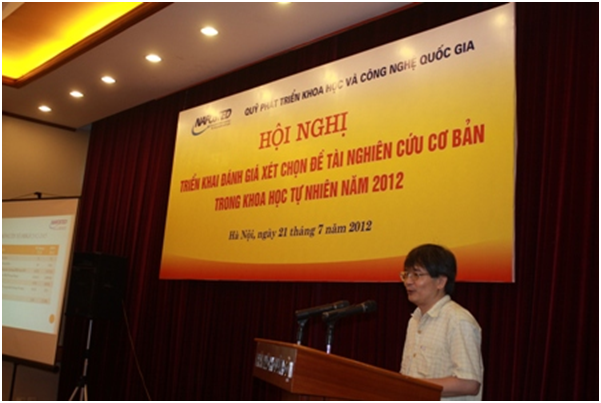 Prof. Ngo Viet Trung, Ph.D. – Chairman of Mathematics Scientific Committee of 2012 – 2015 had a speech at the conference.

Dr. Do Tien Dung, Director of the Executive Office of the NAFOSTED reported the situation of  all basic research projects received in 2012. Number of funded projects through the years

The report shows that the funding policy and activities of the NAFOSTED have been attracting many young scientists (under 40 years old) and scientists from the Middle and the South of Vietnam, and have promoted significantly scientific research movement in the agencies, research institutes, and science and technology organizations all over the country.

In the afternoon, each Scientific Committee deployed the selection process. The next selection meeting was planed from the middle of August 2012. The NAFOSTED expects to announce the list of funded projects in early September, 2012.