On 20th September 2015 at the Guest’s house of Ministry of Defense, NAFOSTED organized a meeting between Minister of Science and Technology Nguyen Quan and members of NAFOSTED natural science & engineering committees 2012-2015. Attendees included NAFOSTED President-cum-MOST Deputy Minister Tran Quoc Khanh, and over 50 scientists and managerial officers who were members of natural science & engineering committees in each field from 2012 to 2015. 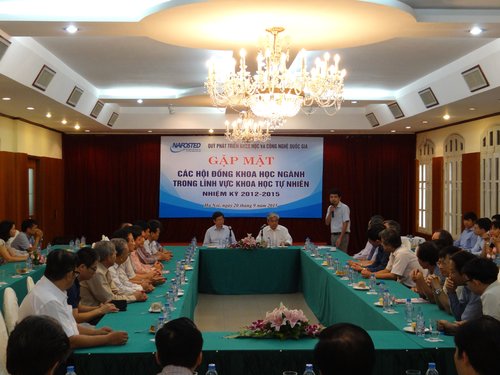 Speaking to the scientific committees, Minister Nguyen Quan pressed the importance of basic research to science and technology industry, also thanked and valued scientific committees’ contributions to NAFOSTED activities, especially juried conferences that had contributed a lot to enhance the foundation’s performance and the qualities of Vietnamese basic researches. The Minister praised NAFOSTED 7-year achievements and also outlined future challenges. The foundation would receive a lot more support from scientists, particularly members of Scientific committees across terms.

During the meeting, scientists attending the meeting had chance to discuss with the Minister. Speaking at the meeting, scientists affirmed the importance of NAFOSTED existence, and agreed with MOST directions to improve the foundation’s activities and thanked Ministry Leaders for efforts to adopt favorable policies and create conditions for scientific research. They also provided feedback on the active funding and support programs, research environment hoping to improve the qualities of projects funded or supported by NAFOSTED, enhance the capability of science & engineering workforce, young scientists in particular. They highly expected a better public access to scientific publications that were results of funded projects to expend the scientific literacy. They wished NAFOSTED to develop in order to meet the expectations and faith of Vietnamese science community.